The collective guesthouse industry of Maldives is trekking through uncertain times.

Earlier when Maldives government made declaration of border closure; which came into effect on March 2020, the local tourism industry has started to witness brunt of the coming days.

Moreover, with government placing temporary restriction of on-arrival visas on 27 March, the international aviation tied to Maldives came to an abrupt halt.

Many of the long operating carriers taking several direct flights to the island nation made consecutive announcements of their decisions to hold off their flights to Maldives.

Meanwhile, industry experts made surveys and estimates on tourism industry’s performance for the coming days.

Furthermore, it is understood the reason for this is over the elevated sense of safety from tourist islands that remain non-attached to mainland areas.

Additionally, safaris or liveaboards do not dock directly at any inhabited islands.

However, the case is not the same with guesthouses in Maldives.

Local tourism, which took flight around 2010 during the Nasheed administration, has seen promising growth in recent years.

Prior to border closure and the subsequent slap of stoppage on Maldives tourism industry, the country had over 500 guesthouse establishments in operation.

Moreover, these establishments cover a little over 2,000 beds collectively.

In short, guesthouse industry remains the second most important cog in the tourism wheel of Maldives.

What is the current situation of the guesthouse industry?

Earlier, Guesthouse Association of Maldives (GAM) conducted an industry-wide survey to assess financial setbacks and business detriments of the industry.

GAM is the premier body in advocating and promulgating the guesthouse industry in Maldives.

Moreover, the association’s survey came with bad news as the venture into the industry’s health showed visible deterioration in stability. 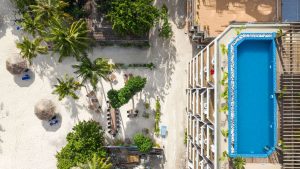 According to GAM, several guesthouse establishments have already been forced to ‘close shop’ while sending their employees off on no-pays.

Meanwhile there have been several corporate redundancies from the industry as well.

The situation becomes even more critical as the country’s tourism sector does not appear to be recovering at a pace as expected by the state or industry stakeholders.

What is the government stance regarding guesthouses?

The collective notion of the guesthouse industry show concern as the state have not provided any credible or substantial information about expected dates for the tourist segment to kick-off.

Meanwhile, the guesthouse segment may face even more plight as many local islands have in recent weeks reported presence of Covid-19 cases.

Health authorities have advised against traveling outside of Greater Male’ Region. 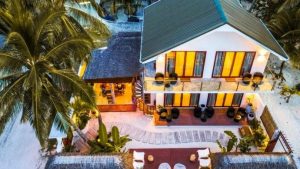 Veli Vilaa – a guesthouse at the island of Dhiffushi | Photo: Maldives Insider

Furthermore this places challenges as the region is notable for the strongest number of local travelers, traversing out of city to guesthouse islands.

On the other hand, Maldives government have not made any announcements in relation to the local tourism sector.

GAM notes in their survey, the uncertainty adds more to forecast of fiscal damages of guesthouses.

As of now, the industry can only remain hopeful of a quicker reopening announcement.

What does the future entail for the guesthouse industry?

According to GAM, their survey indicates visible pick-up in business activities in a period of 8 to 10 months if state allows a September reopening.

However, state has so far made no such commitments.

Many businesses note their worries over new-normal procedures, as such guidelines are yet to be made specifically for the industry.

On the other hand, local tourism sector functions with local council authorities in a symbiotic fashion.

As such, the industry raises concern over the level of preparedness of said council authorities.

Moreover, no details on ‘how to act’ in a Covid-19 scenario have been shared with the guesthouse industry from relevant health authorities.

Previously, in the state’s guideline it mentions a tentative reopening date for the guesthouse industry as August.

However, reports indicate the industry will see a possible reopening in September.