As a country, who is directly depending on Tourism as its major GDP contributor and without an export market other than the Fisheries (considerable contributor), we are prone to any external shocks that has occurred globally, which has impacted Maldives to the maximum.

The last major impact was the Financial Crisis of 2008/2009 — which was considered globally as the 3 F Crisis, as it impacted the Finance, Food and Fuel — had impacted Maldives to a large extend and the aftershock of this crisis kept us limping further more. The domestic financial crisis in Russia and China had impacted our tourist arrivals in 2015/2016, resulting to the last silent crisis Maldives faced with the drop in economy and we were just picking ourselves up over the last two years.

In other words, these global crisis leads to a steadfast drop of the fiscal revenue, whereas the government expenditure/spending increases exponentially and revenue declines leading to an economic recessions. In the most recent further, COVID19 is doing more damage to the world economy at a level one couldnt imagine or comprehend.

Our Foreign Exchange Reserve in Dollars!

Our reserve is in dollars and this is not the first time that we have been impacted this badly, we had the same timeline played during the financial crisis of 2008/2009 and our economy started to revive in terms of Gross International Reserve by 2017. 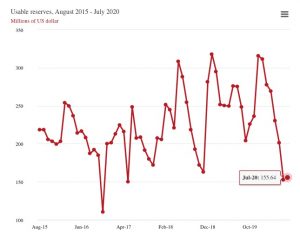 Taking a walk down the memory lane, we could recollect the shortage of dollars in the market during the time period 2012 –2016 (reference to the timeline) and how Bank of Maldives pretty much become just a local service & other services rendered useless for the customers— as they imposed similar restrictions on withdrawls to the extend that transaction was just happening locally. In 2018 as indicated in the timeline (peaks), we started to see an improvised BML, extending benefits to their customers, with renewed withdrawal limits (1600$ via ATM) and deposits available for all the customers.

So what is really happening with these shocks? and why all this unnecessary measures to further doom the country into a misery as we may ponder. But before that we need to understand a key term —

What does this mean? Well it’s quite simple! Usable Reserve is the phyiscal currency (Dollar) available for use. Basically it’s the green currency, which you can touch and smell. Now does this gives you a memory refresh of the infamous MMPRC scandals, which were all about buying dollars and selling dollars? 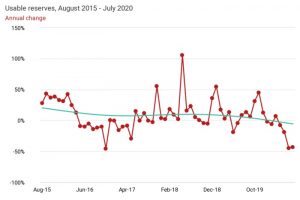 As of July 2020, the usable reserve available in Maldives is 155 Million US Dollars and this fund is sufficient only for 2–3 months of Imported goods need for the country. [Article on Edition.mv]

Indeed, this was inevitable and this was something we have foreseen coming as its not just been a decade since we faced the same scenerio post the Financial Crises of 2008/2009, where dollars came into shortage and the black market exchange rate went as above 19.50 MVR in 2011. Until 2016, we still had a black market exchange rate above 17 MVR and it was only in 2018 with increasing International Reserve and adding more into our usable reserve, the exchange price dropped to 16 and was traded between 16 MVR to 17 MVR in 2018 and 2019. It was during the same time period, our withdrawal from ATMs was increased both for US$ and Local currency and even the foreign transaction limitation and then COVID19 happened.

But, this is something we could have seen from March 2020 onwards and planned and executed much better considering the lessons learned from the previous crisis.

2. SURGE OF ONLINE BUSINESS ENTREPRENEURS: Another factor that was speculated to be reason for depletion was the rapid growth of Online business entrepreneurs and a surge of foreign transactions happening to ensure that these business had products available to sold — cosmetics to electronics to clothing. Normally a crisis calls for saving mentality but I guess we all ensured that Jeff Bezos got more rich 😉 — Online Shopping has exceeded the normal Black Friday or holiday shopping (Christmas etc) worldwide!

In may 2019, Maldives government had to make a payment of US$ 100 Million to India as part of a currency swap agreement signed and this had depleted in the usable reserve and we were gradually picking up before the COVID19 hit the world and entering into a indefinite lockdown.

The three above reasons does have it’s valid points and the current restrictions are mechanism to curb these smaller issues but the bigger concern is that the economy has been on a standstill from the moment we closed the borders up until we reopened the borders just 3 months back (15th July 2020). Our entire economy depends on tourism and as long as the industry is not back on its legs (on full capacity) and adding to the international reserve and contributing to increasing the usable reserve, we would be further going into a unrecoverable recession. We are right now spending what we don’t HAVE!

On top of this, government worldwide had to keep their country afloat in these crisis though there was no revenue inflow. And what we are seeing now is what we faced back during the financial crisis as government and others are taking measures from going into a total unrecoverable recession.

Accept, brace (that we are in deep S***T) and the struggle is once again ON! But this time, unlike all other crisis, we are on a much longer journey.

Editors note: Hussain Jinan is the CEO SparkHub – a management consultancy firm in the Maldives, and a startup enabler with years of experience in business development and research. This article was originally posted on Medium.