Olive Ridley Project, an NGO working in the Maldives to protect sea turtles and their habitats has launched a digital campaign on Sunday, September 11. The campaign is named “Become a Citizen Scientist”, to encourage sea-turtle photo-identification submissions in the Maldives.

According to the NGO, the campaign will be conducted their social media, and also through training events for stakeholders and the public.

The NGO further said they are holding an open event ‘The Turtle Talk’ at MNU this week for the public to learn about their work, sea turtle biology, and the sea turtle identification research project and how to contribute to it. The special guest speaker for the event is ORP’s Senior
Project Scientist Dr. Stephanie Köhnk.

Sea turtles can be identified by their facial scales, with each individual turtle sporting a unique pattern, much like human fingerprints. Photo-ID therefore proves to be a non-invasive method of effectively identifying and recording sea turtles. In order to identify a sea turtle in the Maldives, ORP requires the following to be emailed to seaturtleid@oliveridleyproject.org: 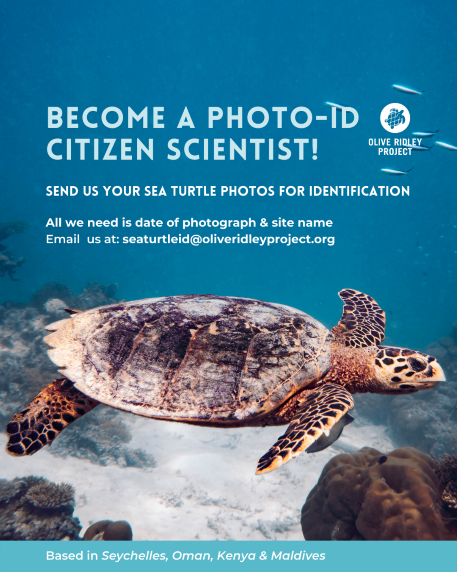 ORP has been collecting sea turtle identification photos in the Maldives since 2013. The organization’s sea turtle database is the largest in the country, with over 5500 individuals identified across 17 different atolls.

The Olive Ridley Project (ORP), founded in 2013, is a charity registered in the Maldives and in England & Wales, whose mission is to protect sea turtles and their habitats through rescue and rehabilitation, scientific research, and education and outreach