Minister Munawwar made the statement speaking in the meeting held with the Ministry and the visiting delegation of the Asian Bankers Association (ABA).

In the meeting, Minister Munawwar briefed on the investment opportunities available in the Maldives, including Special Economic Zone (SEZ) and Hulhumale’ Financial District.

Maldives, he said, is to develop a financial district in the second phase of Youth City development in Hulhumale’. The new building of the Ministry of Finance and Treasury (MoFT) will be developed first. Minister Munawwar invited the visiting bankers to set up branches, highlighting on the several and various incentives for investors.

Reflecting on the massive development projects undertaken by the Government in the past four years, Minister Munawwar noted that this has transformed the economy. He especially noted the Maldives’ role in the Road and Belt initiative, where the country would facilitate as an intermediary between the economies of India and China. He further highlighted on the benefits Maldives would receive as a partner to the Free Trade Agreement with China.

The ABA delegation was in the Maldives prior to the Association’s annual conference. The delegation had held meetings with Minister of Finance Ahmed Munawwar, Governor of Maldives Monetary Authority (MMA) Ahmed Naseer and Bank of Maldives Chief Executive Officer Andrew Healy.

The 35th General Meeting and Conference of the Asian Banker’s Association (ABA) will be held under the theme ‘Banking in Asia: the Next Frontier’. This year’s conference will be held in Kurumba Maldives from the 15th to the 16th of November. 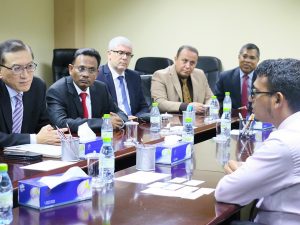