It is not lost of anyone living in Maldives that before the inception of tourism in the country, fishing was considered as the major commercial activity. So much so that the whole process involved everyone in the compact community.

Though the economic background has significantly changed in the recent years, fisheries or fishing remains prevalent in its nature and importance to the country’s community as a whole. From putting food on the table to exporting it to generate revenue for the country, fishing has never become a secondary activity. In fact, it is ranked in the top most economically active sectors in the country.

What started out on sailed ‘dhoanis’ have transformed vigorously into mechanized and engine-laden vessels that has the capacity of ‘tearing’ through the waves at impressive speeds. The country’s fishermen are currently using fifth-generation fishing vessels.

However, the same cannot be said for the island nation’s biggest industrial island – Felivaru. Developed with the aid of Japan’s Nippon Corporation back in 1977, for the purpose of processing and manufacturing products of fish for export, the island’s equipment still remains the same. To put insult to injury, one can say that while the fishing vessels of the country were of 2019 the industrial island of Felivaru is 42 years behind in terms of technology and equipment.

Recently a group of local journalists and reporters were given the opportunity to visit the island of Felivaru to witness the condition of the island from their own eyes.

What was reported back on their respective medias and online newspapers were in fact harrowing.

One of the employees who have had a long career attached to the island bemoaned the industrial island of Felivaru, which becomes instrumental for local fishermen to sell fish for manufacturing, processing and exporting it to foreign destinations, have not had any significant upgrades to the machinery and equipment.

Furthermore, the employees were disenchanted that none of the previous administrations had put forth any projects to revive the aging fish manufacturing facility in the island. 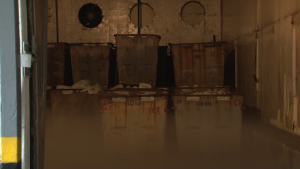 At a glance, the Felivaru fish manufacturing facility consists of cold storage with a storage capacity of 750 metric tons with 10 metric tons of 4 RSW systems with a warehousing capacity of storing 158,400 cans of fish.

The above-mentioned details about MIFCO’s fish processing facility may sound impressive, but only if we were living somewhere in the early 2000s – or roughly 20 years back.

Mainly due to the notable advancements the local fishermen have made with regards to their operating vessels and the use of technology in the fishing activities. Not to mention the considerable push forward for local fishing vessels in storing the catch.

Most of the local fishing vessels, that do undertake in serious fishing activities hold the capacity of storing over 30 tons worth of fish. This is also coupled with the fishermen’s current ability and capacity in fishing over 10 tons of fish even on the worst of the days.

On average, local fishing vessels do catch fish that weigh well above 10 tons – add that up to almost all the major fishing vessels from across the country and that totals to a sum which is not easily put on a calculator.

But this where the situation falls into dire circumstances, as MIFCO’s current capacity for a daily basis in weighing and purchasing fish limits at 50 tons.

Amidst the growing challenges of MIFCO and in light of the country’s most notable asset in exportation, the fisheries company’s now parent company, State Trading Organization’s (STO) CEO and Managing Director Hussain Amru spoke to local media while he was onboard MIFCO 101 – one out of the two vessels used by the company in weighing and purchasing fish from local fishermen.

To say MIFCO 101 would perhaps be the gravest understatement in the last five years, since the vessel had rusted beyond its paint. How it managed to float above water was anybody’s wildest guess.

Mr Amru while speaking to the local media revealed a harrowing fact about the vessel he was onboard along with the reporters.

“This vessel is almost at the verge of sinking; we have been putting concrete at the hull in order to keep it afloat. Originally the vessel is able to store 100 tons of fish in its cold storage, but over the fear of the ship sinking, we are currently allowing only a maximum of 30 tons,” Amru explained.

The mentioned vessel was put into operation back in 2005, which is almost 14 years back. Although the company made acquisition of the said asset from another party, the vessel still had retained its sea-worthiness license.

The same cannot be said about the vessel come today as the most accurate term for the ship might perhaps be a floating ‘rust bucket.’

During the previous administration, MIFCO was brought under the wing of STO as its sister or subsidiary company. A bold move to avoid the ship of MIFCO from sinking into the waters, but if one were to place a metaphorical analogy then it is accurate to say that the ‘hull had cracked and it was already sinking.’

Though the local media had reported on the deconsecrated situation of MIFCO, the current frontman of STO shed new hopes and affirmed that the only way forward for the fishing company was up.

Even though MIFCO cannot escape years of being unattended for, Mr Amru assured that fish manufacturing facility was going to get a ‘face lift’ shortly.

“The funds are ready, and one of the most important things we are planning on putting forth is the factory’s expansion. Details of it will be disclosed later. In the meantime, we are doing everything necessary to make sure we do not hit a dead-end,” Amru explained.

According to the CEO of STO, the coming months will be fruitful and filled with prospective growth for the company which will in turn bring ‘happy news’ for the fishermen.

Furthermore, the cannery capacity will be expanded sometime in the upcoming year according to Mr Amru.

He also noted that the fish manufacturing facility is in need of investment on all areas, however the current influx of funding to the company will ensure the company’s loss is reduced significantly.

“We assure you that we are doing everything we can to reduce the company’s operating and running loss. We will ensure MIFCO will run without a loss in the current year. In the company’s history, the loss crosses over MVR1 billion,” Amru noted.

The reason for the company facing such heavy loss is mainly attributed to the lack of storage capacity on frozen or chilled fish that are bought by the company for processing. Instead of this, the company has to undersell the fish at an export capacity to Thailand.

“We don’t have any other option other than exporting this to Thailand, but that too at a loss of USD400 per ton. The buyers are generally the same parties, and when we attempt in selling the fish internationally, Thailand is able to sell it at lower prices than us and they get to label it as pure catch from the Maldives much like us. The solution is simple, instead of exporting it we must process and can it here in the country and sell abroad,” the CEO of STO detailed.

MIFCO’s parent company honcho assured the company will work towards ensuring that fishing becomes an even bigger economic contributor in the country.